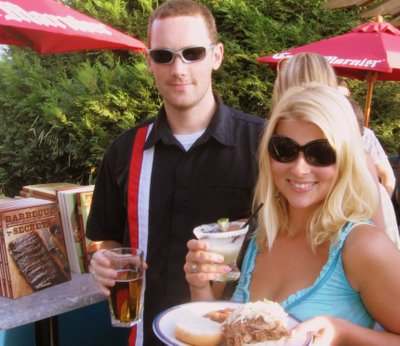 Ah, right. A week ago, I went to Classic Rock 101's National BBQ Championship Grand Marnier Party. As you may have guessed from the title, there was classic rock, BBQ and Grand Marnier involved.

It all started ages ago when I used to work at that dreadful job with my charming co-worker Jen. She's the one drinking with me in all my Boozy Friday work photos (and who, by the way, quit the same day I did...minus the laid off part). I was flipping through Rock 101's contest page, usual for me since I only listen to that station (until I get bored of hearing Rush played 5 times a day, then I switch to another station) and I saw a contest for Grand Marnier. Tell us how you use Grand Marnier and you can win a party for you and 9 friends.

Well Jen and I put our brains together and came up with some crazy ass Grand Marnier crap, from GM seared scallops to GM Sangria and Mojitos.

It paid off. A few weeks later they announced our win on the air.

They laughed at our over-zealous use of the alcohol...then I believe Dean and/or Hatch made some remark about me being an alcoholic. Meh.

Anyway, the point is we won and last tuesday, Ross, Jeff and I made our way to the Boathouse Deck on English Bay to attend our party. We weren't the only ones to win though, there were about 30 people there but still...private party! Soon, Jen, her bf Phillipe and 5 of her friends came...I looked around for Leanne and John to show to complete our 10 but NOOOO, they didn't show. I don't care if you are sick, free booze is free booze!

And free booze it was. GM Margaritas, wine, beer, you name it. Every second a waitress came by to hand us a drink. Then came the food. OMG, melt in your mouth BBQ Pulled Pork. It was too good for words.

The highlight was meeting Dean and Hatch whom I listen to yammer away at each other between 2 and 7pm every weekday. There's something about radio people that always through me off. First, they never look the way you think they look. Second, they really do talk in that annoying radio voice. Third, I think Dean and Hatch were drunk. Maybe it was the free booze. Maybe they were always drunk. But I guess you would never tell by listening to the radio.

Of course, free booze often leads to paid booze, so when the open bar ended at 7, Jeff, Ross and I made our way to New Westminster and continued boozing it up at Scruffy's. Us three at the pride of New West on a tuesday. 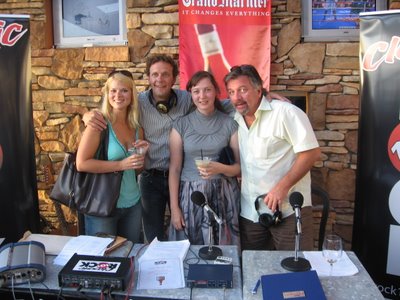 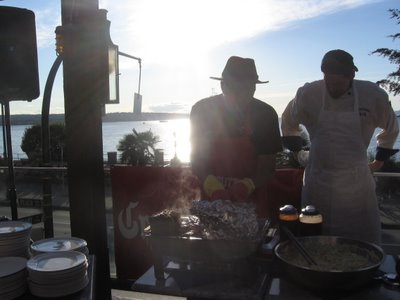 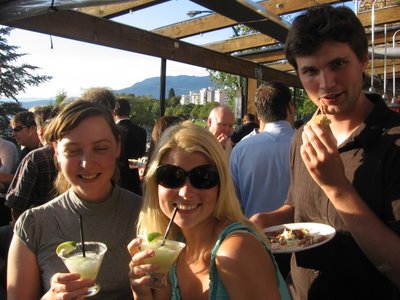 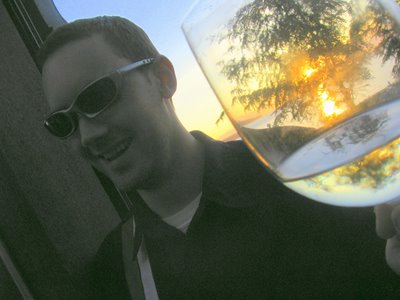 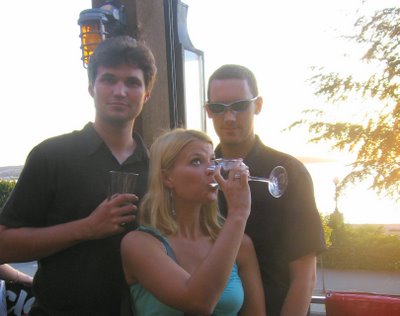 Posted by Wanderlusting at 4:14 PM

I can no longer listen to Dean and Hatch now without somehow feeling like the wool has been lifted from my eyes.