I'm partnering up with Shabby Apple - that company that makes gorgeous, well-crafted dressed for REAL women - and offering a dress giveaway as well as a coupon code for future purchases for all my Anywhere But Here Readers.

The details for the giveaway are coming soon.

In the meantime, you can pick up my novella The Benson, for free.

That's right, I've published a short/story novella that fits in with my Experiment in Terror Series. It's a free, fun, quick and scary read and the perfect primer for all of my Anywhere But Here readers that have heard me yammering on about my novels, but haven't taken the plunge to buy them yet.

Well now you don't have to! Pick up The Benson here: http://experimentinterror.com/2011/12/07/the-benson-free-eit-e-book-now-available/

And get a nice little introduction to my writing, my characters, and the Experiment in Terror Series!
Posted by Wanderlusting at 2:09 PM 1 comment:

FREE BOOKS IN TIME FOR XMAS

OK, well I suppose the title is a bit of a misnomer because really you have the chance to win a free book. But it's not just any book, it's an advanced copy of my newest Experiment in Terror novel LYING SEASON which won't be out until December 13th.

You see, all three of my novels are on sale on KINDLE for just $0.99, but it only lasts until Friday Dec 2nd at midnight. And that's also for how long the contest runs.

So lend an indie author a hand - help spread the word about my Kindle sale and you'll be automatically entered to win a copy of Lying Season! (e-copies only).

A bit about my newest novel LYING SEASON (EIT #4):
"Ama­teur ghost-hunter Perry Palomino has bat­tled ghosts, fought off skin­walk­ers and skirted the fine line between life and death. But can she sur­vive bunk­ing down in Seat­tle for a week with her partner (and man she secretly loves) Dex and his perfect girl­friend, Jennifer? And can she do so while being tor­mented by a mali­cious spirit from Dex’s increas­ingly shady past? With love and life in the bal­ance, Perry must dis­cover the truth among the lies or risk los­ing every­thing she's ever cared about."

And here's my informal review of it: "'tis the season of the lie. Perry gets more than she bargains for when she travels up to Seattle to spend the week living with Dex and his uber hot and sickly sweet girlfriend, Jennifer. In their tiny Belltown apartment. Not that she's a sucker for punishment (well, maybe just a little), but there's a haunted insane asylum to investigate, as well as the company (Shownet) Christmas party AND a douchey rival ghost-hunting team that seems hell-bent on ruining the Experiment in Terror show. As the week goes on and it's apparent that everyone around her (including herself) is lying, Perry gets further tangled in a dangerous web that puts her love for Dex (and their lives) at risk.

Lying Season is a very urban, contained novel and a major turning point for the Experiment in Terror Series. It is heartbreaking and terrifying, poignant and passionate. It will scare you. It will move you. It is, in my opinion, the best book in the series.


And here is the gorgeous cover: 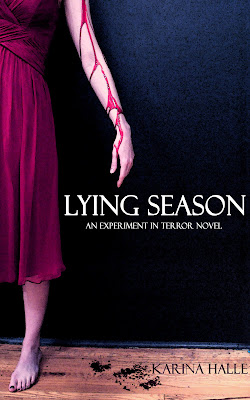 Thanks for your help everyone. Tomorrow I may blog about my stylish new boots (and what a bargain they were!)

OH and if anyone wants to help themselves to an Experiment in Terror button for their blog, go right ahead :) 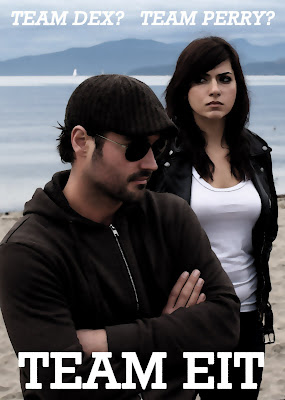 Posted by Wanderlusting at 11:42 AM 2 comments: