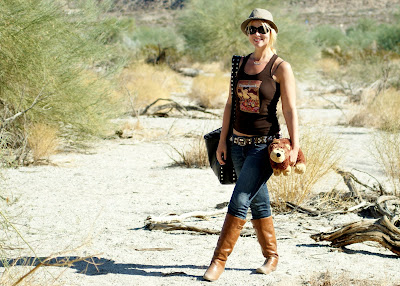 I'm alive, in the desert somewhere. As you can see, Norman is with me too. I don't have much internet contact here so I really do feel deserted but anyway... updates to come this Saturday, from Los Angeles.

Cheers everyone xx00
Posted by Wanderlusting at 3:28 PM 7 comments:

When I was a child, I didn't really have a special "blanket" that I carried around, nor did I have a certain stuffed animal that I had to have with me everywhere. Sure, I had them but nothing I formed a real "bond" with. Maybe I was just a kid without many emotional attachments, I don't know...

Anyway, about four years ago for my birthday, my boyfriend surprised me with some roses and a stuffed bear (among other stuff). I wouldn't even call him a teddy bear, he's much too real for that. But he was the cutest thing ever and I was instantly in love with NORMAN (my bf's middle name ha ha).

Since then, Norman has become the closest thing I have to a dog or a child. Now I don't want the latter but I wouldn't mind the former. I cuddle with him when I'm alone, my boyfriend often puts Norman in compromising positions for me to stumble upon (like, in the shower?) and he's a fabulous traveling companion. He's one of those pillow type animals, so you can flop him around and fold him and he makes the perfect pillow for plane and car rides.

Anyway, I was contemplating bringing Norman on my upcoming road trip to Palm Springs when I realized he had been before. This bear has gone everywhere. My boyfriend was OK with the idea, though he warned me to not lose him: "I would just feel bad" - funny how you can feel bad for a stuffed animal, but that's Norman!

Sometimes he tries to steal me away from my bf...

But they get along the rest of the time

Norman has gone everywhere, here he is in Palm Springs with my old dog Ellie

Here he is at the cabin

On the way to Seattle...

At my cousin's in Helsinki

With his Finnish/Canadian bear friend in Finland

Here's to many more adventures with NORMAN THE BEAR!

Hope you all had a fantastic Halloween! I know I did - spent the Friday photographing/reviewing the beachy indie band Best Coast, then jetted off to a friend's Halloween Party - all while in my costume. Saturday I had a party myself, and Sunday was low-key with lots of scary movies.

I was Meg Griffin, my bf was Ash from Evil Dead. It's probably the ugliest I've ever looked for Halloween, but definitely the funniest. Hearing people to tell me "Shut up Meg!" and the laughs from random strangers was hilarious and SO worth it.

This is keeping with our TV/Movie/celeb character theme that we've done over the last few years:

Leela and Zapp from Futurama, last year (just looking back at those costumes, holy HELL was that a lot of hard work to make those!):

And Peggy Bundy, The Bride from Kill Bill and Cinderella round up some of the rest :)

OKAY! On to the good stuff. The winner of the giveaway, those awesome earrings courtesy of Net-a-Porter and DESIGNER APPAREL

Selected by random.org, the winner is:

DINA'S DAYS!!! Congrats!! Email me for the details!!

BUT don't fret if you didn't win, I've got a special treat for you.

LuLus (www.Lulus.com) is one of my favourite shopping sites (their shoe selection is to die from) and from now until November 12th, you can get 15% off anything in the store simply by entering the promo code: ANYWHERE. It is case sensitive, valid for customers in the US, Canada and the UK and is a one use per customer coupon. The coupon is for 15% off the
total purchase and is a site wide discount.

Hope this gets your weekend off to a great start!! :)
Posted by Wanderlusting at 1:26 PM 8 comments: