I went to my first tweet-up the other day. Well, my first official tweet-up. There's actually been a ton of people I've met, in different parts of the world like San Francisco and Poland, that I met originally through Twitter... but I guess that's not really a tweet-up, is it?

Yeah, I had avoided tweet-ups in my own city because A) I thought they were lame and B) I felt like the totally uncool kid that never gets invited anywhere (and this is usually true, btw).

But it was an old high school friend of mine - SSDATED - who I hadn't seen in ages and who I know is pretty freakin' awesome, and it was her own tweet-up party, so I figured, why the hell not?

Night started off slowly (was held in the swanky Glowbal Afterglow Lounge in Yaletown which is a lot different from the gay bars on Davie St I am used to frequenting) but soon I was meeting tons of Tweeps I knew from my daily Twitter feed, and meeting more lovely people as well.

I don't want to post any pictures here because I'm afraid of accidentley outing someone who wants to remain anonymous *ahem* so I'll just post this pic. It's of me. You all know what I look like. 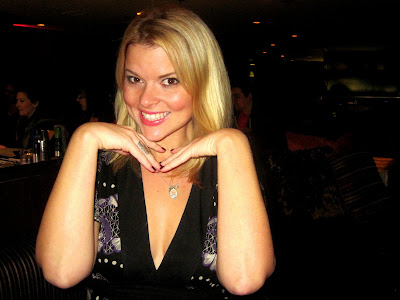 ANYHOO - one of the things everyone was talking about that night was how they got started on Twitter, how they are trying to convince their friends to tweet, how some people just don't get it - and look, I was totally one of those people! I thought "uugh, just a bunch of status updates, laaaaaame" BUT IT'S TOTALLY NOT LIKE THAT.

Or, at least, it shouldn't be. And then I got thinking, how can people (especially those who are wary about it or not sure how to use it) get the most out of Twitter?

Here are some tips:

1. Follow interesting people - this is key. Whether they are funny celebs, up-to-date news sources, or just off-the-wall people you've never met, having an interesting feed is what will keep you reading.

2. Talk to people - if you have interesting people in your feed, best thing you can do is converse with them. This is an online community, like a large public chat room. Just by talking to people, you'd be amazed at how much you have in common with many of them. If you find the right tweeps, your time on Twitter will be much more enjoyable. Lately, I've been laughing my ass off at what's been said by some of my more rowdy friends (Boobs and the Dude, you know who you are).

3. Unfollow boring people - or people who cheer for opposing hockey teams. Basically if anything makes your Twitter experience less enjoyable, there's no reason to follow them. Tweeters who make you angry or bore the shit out of you - cut 'em loose. Other people may find them enjoyable, they just aren't your cup of tea. Too bad Twitter doesn't have the Facebook "hide" option, for those that only annoy you on occasion (like during hockey games).

4. Don't take anything personally - if someone disagrees with something you said or *GASP* unfollows you, it is hard not to feel slighted or defensive. But remember the internet attracts different people, sarcasm can be VERY hard to read at times (especially if you don't know the person well) and people unfollow for many different reasons (see above). I know I can be opinionated and I tweet too much - whatever. People can, and do, unfollow me for those reasons and others. Different strokes for different folks.

5. Retweet the nasty stuff - occasionally you may find yourself under TWITTER ASSAULT which is far worse than someone unfollowing or disagreeing with you. People who are angry/miserable enough to engage in Twitter Assault are usually the type of people who delete their tweets after too. Retweeting it says "hey, I see what you did there - now everyone else sees too." Your lovely loyal tweeps will usually jump to your defense and you'll show the attacker, hey that's cool you think I'm a ____________. Celebrities do this all the time and I think it's pretty funny. Especially when Neil Hamburger does it.

6. Retweet the funny and interesting stuff - retweeting is sharing. Sharing is caring. You like something you've read? Retweet it - share it with others, plus you credit the original tweep who put it out there. Retweets are like kisses... or some other analogy.

7. Don't be afraid to promote yourself - Twitter is one of the greatest marketing tools out there. There's nothing wrong with taking advantage of the technology and using it to help yourself out. It's also a great platform for helping fellow friends, causes, events, etc. But...

8. Don't spam people - one or two tweets about something is perfect (per day). This blog post might get tweeted via me twice today, just because a lot of people aren't on Twitter all day long and might miss it - especially if they have a busy feed. But if you mention it a lot, all the time, and especially if it's the SAME tweet... ugh, that's just akin to spam. Speaking of...

9. Block Spammers - someone replied to you that you don't know and they have an egg for a picture or a "hot" girl and are wanting you to click on a link about whatever the hell you might have tweeted about moments earlier? DON'T DO IT. Report them for Spam immediately. It's been getting worse lately it seems (least for Vancouver Tweeps), so nip it in the bud and it will help stop the spammers... until they open a new account.

10. AND HAVE FUN - Why so serious? Twitter is a place to vent about your commute, to complain about Justin Bieber, to celebrate going for a run, for teasing Caddyshack and Bacon bots, sharing music, developing crushes, and for engaging in mindless/intense conversations... all for 140 characters or less.
Posted by Wanderlusting at 11:14 AM 24 comments: 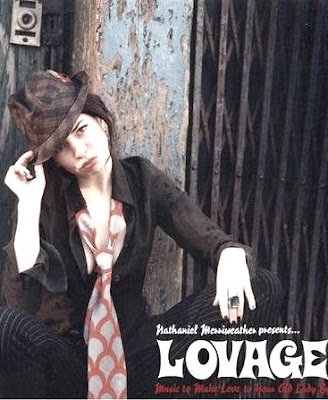 For neglecting this blog lately. It's very important to me, believe it or not, but I've been busy writing so many other things... well anyway, that's not really a good excuse.

So I'm going to make it up to you guys - consider it my Valentine's Day gift to you, my lovely readers.

First of all, to spread the love and set you in the mood, here is some Lovage - hit play and keep reading. Or watch it. It's pretty sexy... well...Jennifer Charles is anyway, rest of the video is just plain budget (couldn't afford to give Mike Patton a tooth):

I'm totally against Valentine's Day. In fact, I think I hate it more when I'm actually in a relationship than when I'm single. At least when you are single, no one is asking you "what did you get? Where did you go?" and so on. People know you're not in relationship so they don't bug you - least they never bugged me when I was single. Also cuz I think it's kind of scary to ask singletons about Valentine's Day, some people get pretty testy about it (and rightfully so!).

But when you're in a relationship, then you get the questions and for some reason it gives other coupled people the free rein to brag. You know, "Oh, my boyfriend gave me this Tiffany necklace and then we went to this fancy restaurant, BLAH BLAH BLAH... so, what did you get?" "Uh, I got a handwritten note from my stuffed bear, Norman." 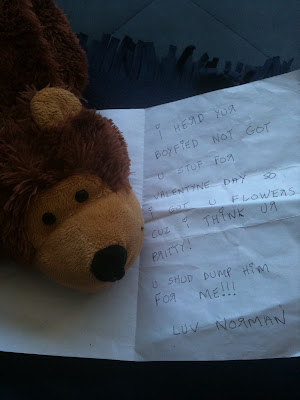 Now, I loved that note so much that I kept it. But, you tell someone else that and they're like, "what a cheapass boyfriend you have". To which you reply, "NO. He's not a cheap ass, we just both fucking hate this stupid fucking day, so lay off bitch!"

But then people accuse you of being all defensive and shtuffff.

So, the way I combat this problem is by avoiding social media on V-Day. Yeah, I know... not going to happen but the thought is there.

Also, I've changed Valentine's Day to LOVAGE DAY. Because there's nothing wrong with celebrating sexy music. And if you have no one to get busy with, put this on and get busy with yourself. And seriously... how can you not?

There was a second of all! I'll be offering a discount code for Overstock.com over the next couple of days. This will be exclusive for my readers. I think this is awesome because I used to buy MANY pairs of shoes from the store and always had a painless shopping experience. Shipping was easy (even to Canada) and the variety of shoes is amazing. ALSO they sell tons of over stuff... like... everything!

PPS - my blog has been on my mind lately, especially last night as I was falling asleep, and this morning I got a lovely, out of the blue email from a reader who basically reinforced that I should write more. Serendipity at work again!

ADDENDUM - Since the publication of this post, I have decided that St. Patrick shouldn't get all the fun... let St. Valentine in on it too. So, along with copious amounts of Lovage, why not make Valentine's Day/Lovage Day an excuse to drink red beer (Rickards Red or what have you) until you're blindly staggering around town, throwing candy and cinnamon hearts at each other? This is what I'm doing tomorrow - I hope you will be too :)
Posted by Wanderlusting at 11:38 AM 7 comments: