So I went to the Sasquatch Festival at the Gorge Ampitheatre in Washington State last week. Despite its proximity to Vancouver, it was actually my first time there. And what a drive. After leaving Seattle you are whisked away through snowy Snoqualmie pass before being plunked down in the dry, rugged interior: 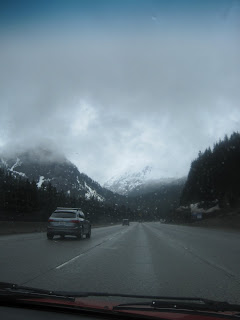 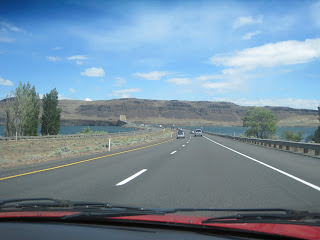 I went on behalf of Consequence of Sound and got to meet a bunch of my colleagues for the first time (one I've met a few times in San Francisco thanks to my frequent travel to the Bay Area - speaking of, I should probably blog about that since I went again just a few weeks ago). We manned a booth at the festival too, lots of people were apparently stopping by and asking for me (when I wasn't on duty) which is really cool, just, who were you people? Lol. Leave your names!

Anyway, we camped out in general camping which we nicknamed District 9 since it was out in the middle of nowhere and people were running amok with utter lawlessness, eating cat food out of dumpsters and gambling with Nigerian warlords.

Actually it wasn't that bad. The worst part was having the hippies next to us bust out their guitar and steal our camping chairs when we weren't looking. But once I discovered that if we hung out at the front of my car - AWAY from the hippies - we actually had a pretty sweet spot. Sweet enough to make you forget you haven't showered for days and the porta potties were a good 10 minute walk away.

*How every third person was a Canucks fan. Canucks jerseys, flags, towels, EVERYWHERE. Go Canucks Go chants before every show. So amazing! 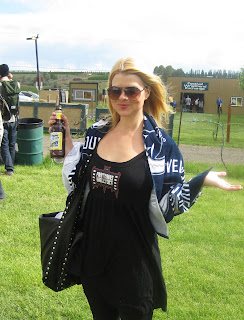 *Having media and working passes which meant that we could go in-and-out to the festival (how dumb is it that regular festival goers are not allowed to leave the festival and go back to their camp? Very dumb) 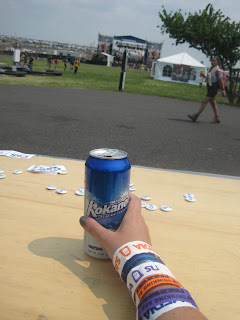 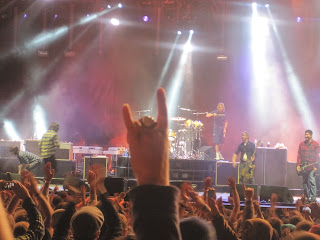 *Hearing some pretty ridiculous stories from fellow campers such as the naked guy on one hell of an acid trip who was jumping around in the bushes on the walk to the festival, who tried to jump over a fence from TEN FEET AWAY and then was closed in on by 5 stormtrooper like cops who tazed him.
Also, our neighbours lost their fellow camper overnight. She never returned in the morning, didn't have her cell phone on her. They went to the Sherrif's office, the hospital, searched all the campsites for her (yeah that's like 40,000 people or something). She turned up later with a dude called Wild Bill and when her friends freaked on her for making them worry she said, and I quote, "But I facebooked you to let you know I was OK". 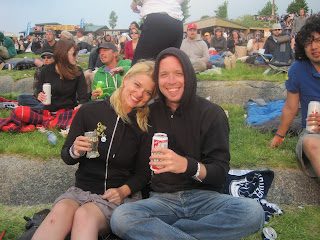 *Having people stop by the CoS booth and compliment us on our music site. So many people rely on our Festival Outlook page to keep ontop of lineups, it was outstanding!

*House-music parties until 2AM + 830AM wakeup calls (ie, you can't sleep in here)

*Arguing with my bf at the quesadilla hut because he forgot to get me one. Finally getting one, then walking down the hill to the mainstage to catch Flogging Molly, slipping somehow (damn you KFAD boots! Angel Dust boots you are not!) 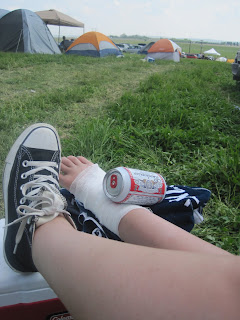 *Missed Modest Mouse because I was in the Medical Tent

*I am sunburned. On my bunged up knee

*I was the most coherent person in the Medical Tent. I had not been drugged, nor did I need to be on a stretcher with an IV hanging out of my arm like everyone else did 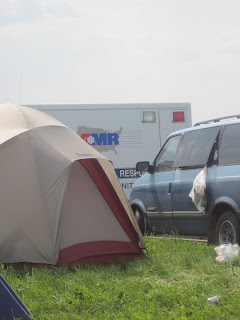 *Kind neighbour Dave gave me copious amounts of Wild Turkey during the Flaming Lips to help me deal with the pain. It totally worked 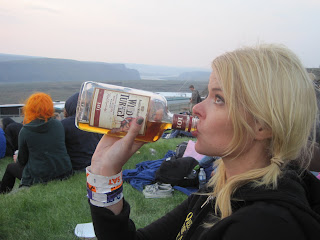 *Bitching with the CoS crew about commentors (we all get haters!) 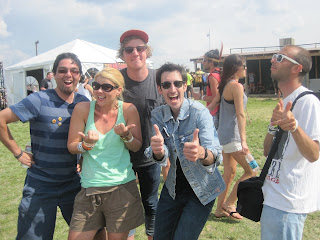 *All weekend I was just...ME. No author, no music journo (though that's what I was there to do), no email, no twitter, no facebook, no blogs, no marketing, no anything. It was just me, my man, fresh air 24/7, sunshine and music. That was it. Sprained ankle and all, it was the most relaxing weekend I have had in a long, LONG time.

So Sasquatch may have won in our fight. He may have battled me and I may have walked away with a fucked up leg, but the fight was worth it. 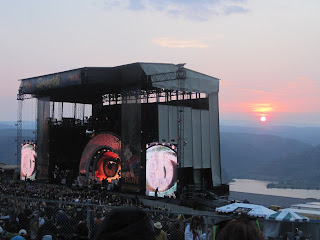 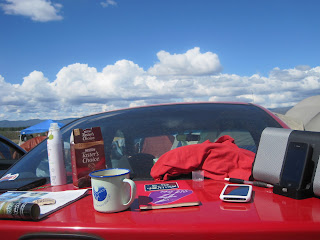 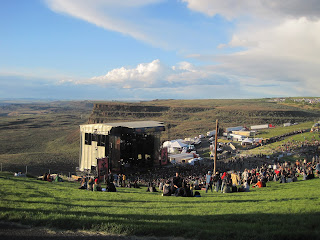 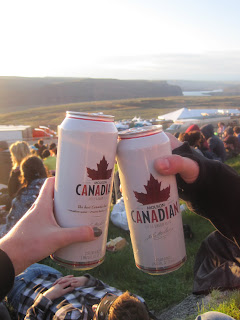 Posted by Wanderlusting at 11:41 AM 6 comments:

Well, it's been over two weeks since Darkhouse was unleashed on the world and I thought it would be cool to put together some feedback on the book. All good feedback, at this point. There hasn't been any "legitimate" negativity yet, though I know that will come. Not everyone can like everything (as a music journalist, I know this all too well) and my book(s) certainly isn't for everyone. But when I do get some constructive criticism, I'll be sharing that too.

But until that comes - and for my own benefit - here's what people have been saying on Twitter and Facebook. Best of part of this is, some of these people I have never met before. Makes me happy to know the books are reaching people everywhere.

@LouLaBeans LouLaBeansLori
@Wanderlust1ng your book is really good! It gave me the appropriate creeps as I was reading it in the middle of the night.

@bitsyblingbooks Charlie Courtland
I'm reading DARKHOUSE by Karina Halle. It is a page turner. Read till 3 am. Mature YA, paranormal horror (ghost not blood).

Erik Bailey
Got the book in the mail today. Had to force myself to stop reading at chapter 10!

Kate Rogers
I am half way and loving it!

Karina Lean
I read a copy on my friends kindle... fricking loved it. I seriously read it in two days. When is the next book out??? Btw I imagine dex to look like the guy who hosts amazing race?!?

Then of course there are my first book reviews, this one courtesy of Bitsy Bling Books (check out the site, it's awesome):

"What makes it so good? Perry is a reliable character: flawed, insecure, impulsive, but despite her own roadblocks she has a determination that the audience can clearly see even if she does not (yet). It is her self-awareness that makes the character appealing, trustworthy and honest. Her vulnerability provides sympathy without demanding pity. Dex is similar and it is not surprising that the Clown Lady insinuates Perry and Dex are cut from the same cloth. Their contradictions show strength of character and reveals a great deal about the individuals. For example, Dex admits he lies and by doing so disproves he's a liar because he confesses to the deceit. A true liar would never willingly reveal this deprecating detail."

"Darkhouse is an example of a confident and assured author's 'voice.' The writer connects with the characters, deeply understanding and channeling them onto the page. By the end I was convinced Perry was writing this story. I have no doubt that Perry and Dex are real--and they live through author Karina Halle."


And excerpts from Candice Baked in Vancouver's hilarious review (read the rest on her great blog):

"Right from the start the main character, Perry Palomino, sucks you in with her relatable and sarcastic personality."

"As I read through the first few chapters, I was drawn into the stories that have yet to be told. There was enough character information to give me a glimpse into her life, and that of the Palomino family, which made me wish there was a corresponding movie I could go see after I finished reading."

"There were times I thought I could predict what was going to come next, only to be surprised by the creativity that turned up around each corner (or should I say each page)."

"When I arrived at home, I found flowers and a bottle of wine that bf had got for me. What a sweetheart. I poured myself a glass - - and then immediately locked myself in the bathroom for 2+ hours to become one of those people I had envied before. I had a book - and I liked it enough to not watch television in order to find out what was happening!! Not only that, but in the bath! I continued reading so much so, that bf had to come in and restock my glass."

"Not only had Darkhouse turned me into a sexy bitch, but it also left me craving answers. I contemplated paying Karina to tell me what happens at the end, but I know it will be far more interesting to explore and grow with these characters in the books to come. This series will no doubt have more twists then I can even begin to anticipate right now - and that is what a series should be. Addicting."


If you've happened to read a copy, I'd love to hear what you say. Drop me a line on Twitter (@wanderlust1ng), on my Facebook Fan Page (www.facebook.com/experimentinterror), in the comments here, or just email me (see sidebar). You can also leave reviews on Amazon (if you purchased through Amazon), Smashwords or GoodReads.

Honestly, even if you didn't like the book, I just like to talk about it anyway. Nothing makes me happier than discussing my books and my characters. This is the closest I'm ever going to get to becoming a mother, people! Indulge me :)

And if you have yet to pick up a copy (in print or e-format), you can pick your poison HERE.

By the way, the second book, Red Fox is being released on June 13 (JUST TWO WEEKS!). I'll have more information about availability and advanced copies, pre-ordering etc, down the line.
Posted by Wanderlusting at 2:01 AM 3 comments: