So someone please explain..... 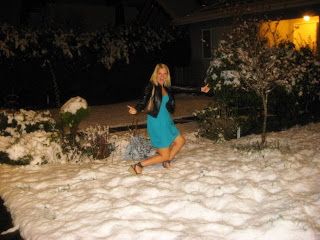 Now before any of you start making Cold Canada jokes let me remind you that the above also happened all over Washington state this past Friday - and normally we only see snow RARELY and in January. NOT IN APRIL! And not when the rest of the freakin' country is breaking out the sandals and shorts.

Honestly, I don't know who to blame or get angry at. I've tried shaking my fist at God but he just shrugs like somehow Global Warming is OUR fault or something. SHEESH!

Anyway, as you know I am a boot-wearing gal so I decided to embrace "Spring" and wear a dress and sandals on Friday to my bf's rawk show. Little did I know, the MINUTE I got in my car and drove to his house it started to HAIL. And then while we were at the show, it started to snow. SNOW. In April. In Vancouver which should be at least 20C (70F for ya yanks) at this time of year. SNOOOOOOOOW! 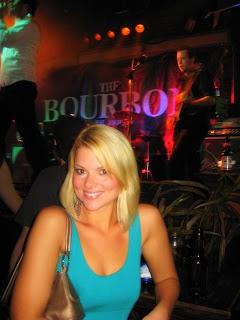 But despite the snowy weirdness and my shaken faith that the weather will eventually get better, the rockstar and I headed out to the Washington State town of Bellingham to use a free hotel coupon and eat at the Olive Garden. Luckily it was sunny (though fucking cold) and the night away from the city did us a lot of good. It's amazing how just a night in a hotel, even if it's near your own place, is so rejuvenating. And though I had been to Bellingham many, many times before (or should I say I've been to the mall, many, many times before) we still took some time out to explore the cute historic town of Fairhaven where silly photos took place. 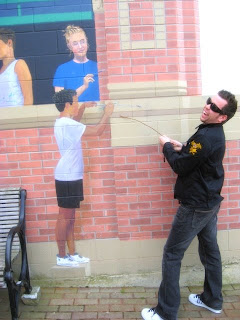 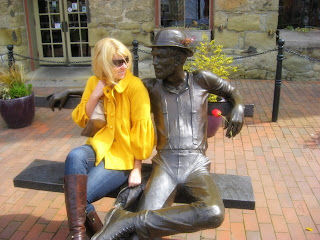 Did I also mention that Josh is back in town and rooming with me?

It's a bit difficult at the moment because I am so damn tired from work that all I want to do is sleep - and Josh is the essence of a night owl. 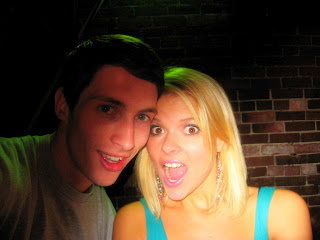 But we make it work.
I mean I know he is really trying to be as quiet as possible at night but I can still hear him through my earplugs (remember, we share a room - cuz my apartment is just that)plus when the light is on, I just can't sleep. I really wish I wasn't such a light sleeper. Thankfully I bought a new sleep mask and stronger earplugs so lets hope they work so I can at least get a good nights sleep for tomorrow.

Today was the first day at Insight Film Studios and I was so unbelievably tired - though that might have had something to more with going to bed completely and utterly stoned last night. Anyhoo, the internship is OK though its a big studio so I feel kind of lost and unimportant - the last place I was at was much more personable and smaller and I know they really appreciated me. I miss them already!

Also, at the new place I have a feeling that they think I will be working for longer than I thought I would be - I heard them mention "throughout the month." Lemme just say that the MINUTE I get a job, my free labour days are done.

And because I have a meeting with a producer tomorrow morning, a job might be closer than I think. At least I hope so because with my EI clock ticking down, I may just have to take a temp job as a last resort - hell, anything with money is a good thing.


But I'm not going to go into too much more of this since you've already heard it...instead, let's talk about SUMMER and all the exciting concerts coming up.

What shows/concerts are YOU excited about????
Posted by Wanderlusting at 7:27 PM 9 comments:

So...things are looking up. Which is such a relief because I was so depressed about two days ago. Two potential job leads turned out to be ANOTHER internship - one they wanted someone to work in Casting for A MONTH for no pay, the other was being an administrative person for a film organization - two days a week, no pay.

Do people REALLY need interns to do admin work? I mean, come on, fork over the $10 an hour and actually hire someone to do it.

You know, if I didn't have massive apartment fees, a mortage and my EI running out in two weeks, I would be totally down for more internships. I mean, in an internship you are really respected because HEY you are working for free and they are just glad to have you there (so I've been told). But you have to draw the line somewhere and come April 25th I would have put in 120 hours of free labour.

Anyway, that cheesed me off that some companies think students will take anything (and we are continuing ed students which means we aren't 21 years old and living with ma and pa - we have done school in the past, been in the workforce for at least a few years and have mortgages to pay, mouths to feed etc). Toss us a frickin bone here - I mean...really.

BUT things are started to look up. I've really hunkered down the last couple of days and started using all my networking skills to line up potential jobs, people, anything.

Let's just say it's paying off - there are a few promising scenarios on the horizon, one involving my script, three (and potentially more) involving awesome jobs in the Film/TV/commercial industry. But I don't want to say any more lest they all go nowhere - however, since I've had such an unusually dynamic, lucky and ironic day, that if anything good does come out of this, I will be sure to tell you all about it. Just want the story to have a happy ending. 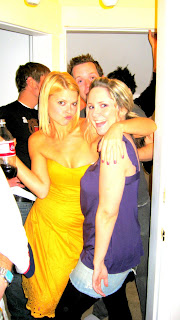 PPS - You have to try these vodka freezies - just like when you were a kid and had freeze pops - only it has booze in it. Yummy, yummy booze. www.blackflycoolers.com
Posted by Wanderlusting at 5:59 PM 12 comments:

Man, it feels like its been forever since I have written in this thing. But what can I say, if you read the last post, you'll know just how busy I have been.

Somehow, as daunting as it seemed, I tackled and completed my school WEEK OF HELL. It's all behind me now, thank God, but for shits and giggles you can view two of my projects: A fake distribution company and a fake marketing plan for a fake movie which HAD to be called Broccoli - www.hallewoodpictures.blogspot.com

Of course I just HAD to do it blogstyle, which inspired a lot of my fellow classmates to make their own blogs. And I am happy to say, my teacher loved it too - in fact, he was howling with laughter and called his wife after my presentation to tell her all about it. Once again, last minute projects pay off for (did I mention I did them all in one day?)

So that was that. I am not done school just yet as I have a couple of night classes with regards to career building that will be conducted the week after my internship. Then followed by a graduation ceremony/dinner on the 25th. And then, somehow, this horribly intense four months of school will be....over.

Meanwhile, I am doing my internship.

I like it. I enjoy the people and am doing all sorts of research stuff like calling newstations in Akron, Ohio and trying to acquire footage from the 2003 Blackout or calling Hydro companies and inquiring about shooting locations in their control centers, or going to the library and researching schematic drawings of D-4 and C-45 transport planes. You know, the usual. Not to mention compiling the best database ever of every television broadcaster, and the contact information for every credited director in Canada. Soon to come (at my own prompting) will be script coverage and analysis.

But while I am showing up everyday and working hard for 8 hours a day - UNPAID - while desperately broke and unable to pay bills, I can't help but be a bit disheartened that there is a lot of emphasis on my only being there for two weeks.

See, I was hoping that this could possibly lead to long-term employment. But all I hear is, "Well, when Lusty is gone in two weeks, we'll need to get more help" or "This is lusty, she's helping us in development...for two weeks" or "I'm not sure if you need keys since you will only be here for two weeks" or "I'm not sure how much research you can get done in two weeks" or "Since you'll only be with us for two weeks.,..yadda yadda yadda I GET IT!" I mean, these people KNOW I am actively looking for employment, have expressed interest in getting help from them to find me employment - and then they complain about how overworked their junior development girl is and how hard its going to be for her once I leave. WAY TO RUB IT IN MY FACE!

Of course, it doesn't help that in a seperate department of the company, they took on a fellow classmate of mine as an intern. And pretty much told her if she works hard, she'll have a job. WHAT ABOUT ME?

And then there is another classmate who did her internship in craptastic Toronto. She started at the distribution company on Monday and ALREADY she is Director of marketing and PR, is flying to LA this weekend to promote their new film and going to Cannes Film Festival next month where she will be selling the film and arranging parties for famous people.

I mean....gah. I have no words. And she deserves it, she'd be really good at it. But it seems a bit unfair, that she with no film or corporate business (she was a waitress) is suddenly...SUDDENLY...doing so well.

Life...it's just not fair. And I know this cuz here I am, dying for a job in the business while everyone else seems to get things handed to them. Some people have awesome luck that totally benefits their lives. What's my luck? Being on Inside Edition or witnessing a bank robbery. Nothing useful, just weirdass strange occurances.

But...I'm trying not to complain or shake my fist at God too much - cuz it doesn't work. What I am doing is just barreling down, making the most of my internship and praying that SOMEDAY my hard work and talent (yes, I have that too) will pay off. I know I have said this for what seems like many, many years, but...no...there is not buts. This has to work out, one day.

And as such, I have actually volunteered for another internship for the week after I am done this current one. It's with Insight Films which is kind of a big deal and once again, it probably wont lead to me being hired or anything. But I am hoping, just hoping, that eventually all this FREE hard work I am doing will pay off.

PS thanks to Rachel and Charm School for their Ebay winnings! Hope you enjoy them!
Posted by Wanderlusting at 8:20 PM 14 comments: