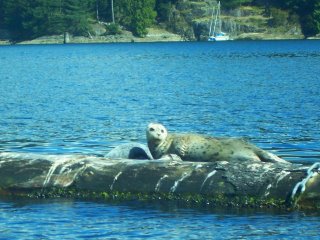 Remember when animals used to be scared of the sight of man? I've recently discovered that this just isn't true anymore. Over the weekend, I went swimming in the ocean. A few fat seals are usually camped out on the logs, a few odd meters from the docks. While you can get quite close to them in a little boat, you risk scaring them into the water.

So, my mother and I decided to swim towards them and see how close we could get. The seals lifted their lazy heads from the logs and peered at us inquisitely, but we could tell if we swam any closer we would scare them away. Then I noticed a seal swimming a few feet in front of us. But instead of swimming away, it turned to face us. It gave me a hard gaze, not breaking eye contact. Then it started to swim towards me. And then it dissapeared under the dark water. When humans try and get close to wild animals, its quite thrilling. But when animals reverse the situation, it can get a bit unnerving. Needless to say, we decided we had enough of the seals and swam back to the boat. I had an eerie feeling that the seal was swimming a few feet below me.

I would like to say that was a one off incident but it's not true. Yesterday I went for my walk around Lost Lagoon. I took off down a quiet, wooded path, with no one else on it. I thought it odd since it was late afternoon and everyone in Vancouver seemed to be about. But I pushed on and turned a corner. There in front of me was a raccoon. 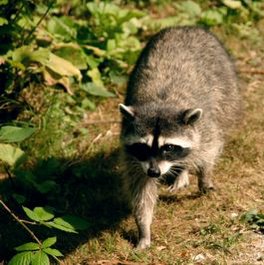 AWWWWWW, was my first thought. I wondered how close I could get to it, it was only a few meters away, on the side of the path. I walked slowly towards it, careful not to scare it. It looked up at me. I looked at it. It took a step towards me.

I know raccoons are cute and all, but I couldn't help but notice the signs around the park that said RABIES!!!BEWARE!!!

I ran quite aways from the wee rabid raccoon until I came upon a flock of Canada Geese crossing the path. There were about a dozen of them. I thought my running towards them would scare them off the path, but it didn't. In fact, they just stopped in the middle of the path and looked at me. There is something about the cold, hard eyes of Canada Geese that make you feel small. I stopped running and waited for them to sloooooooowly make their way off of the path and into the lake. There were a ton of them and only one of me. It wouldn't be hard to see who would win in a fight. Thank God the swans weren't around. 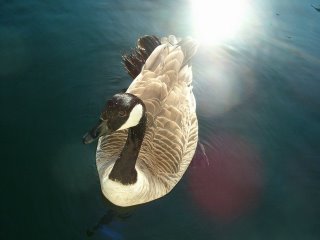 Angry at the lack of respect from the Animal Kingdom, I strutted purposefully back home. I came across a squirrel crossing the street.

AH HA! I thought. Squirrels are afraid of everything. I raced up to it. It stopped, stood up on its hind legs and looked at me. It wiggled its nose.

That was enough to get me scurrying away in the opposite direction.

Haven't you seen that killer bunny in Monty Python and the Holy Grail?

Posted by Wanderlusting at 10:52 AM

These Canadian animals are planning something I swear. Alex and I thought it would be sweet to feed the animals at the park, we were wrong. Within minutes they had circled us and we had 12 pairs of beady eyes staring at us. I got so freaked out I ran away screaming. Beware of the squirrels!

I guess since you said Giraffes twice you had to post it twice.

PS Kelly did you ever end up giving that Giraffes? Giraffes! book to Josh?