It's In The Game 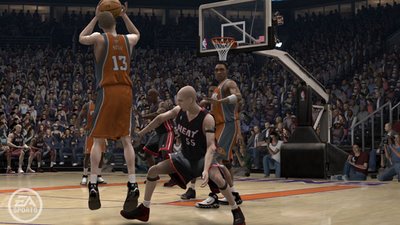 Above: Jason Williams, for my favourite team, the Miami Heat

Yes. They do pay you to do that. Unbelievable, right?

It all started when I saw an ad on Monster.ca. A temp agency was recruiting for this job: VIDEO GAME TESTERS NEEDED. I thought, hell I may know nothing about video games, but the pay isnt bad considering the job, and something short term (4-6 weeks) will suit me perfectly.
So I got the job, went in last friday, did my basic training. On the monday I began my first official day of work and was put into my team.
I'm on team NBA Live 07, for the QA (Quality Assurance). The Xbox 360 version ships out in about 2 weeks, so I'm basically playing the game and looking for bugs. Of course, the bugs I do find are minor and since the game has already been shipped to Microsoft for further testing, they dont do much about the bugs I find. Which is great, because all I have to do is...play the game.
For 7.5 hours a day.
Now, I was dissapointed at first because I wanted to be on the FIFA 07 team, playing football, or on the Need for Speed team, testing the car racing, or on the Medal of Honour Airborne team (testing on PS2s) bombing the Germans. But no, I get stuck with basketball, of which I know nothing.
Or I should say, of which I DID know nothing. I know a bit about it now, and I've played it this whole week and already I can win games (especially in Dynasty Mode, when I play with my fav team, the Miami Heat). In fact, yesterday my Testing team (I'm the only girl tester on my team) was entered into a tournament, in order to get to know each other better. I was given the Rockets, which has that big Chinese dude on it (butterfingers when he comes to dunking though, even though he is as tall as the hoop). I played against my supervisor and won! I made it all the way to the semi-finals, thanks to my confusing strategy of pressing all the buttons at once. Yay!

Anyway this is a typical day at work:

*Arrive at 9 am. Eat big waffle breakfast from cafeteria while watching the person next to me play Need for Speed.
*Play NBA Live 07 on XBox 360
*Go for a break...my thumbs are getting sore
*Play game
*Go for hour lunch, eat gourmet food from cafeteria
*Play game
*Take another break...the Heat are losing in a game vs the Cavaliers and I need a time out
*Play game
*Go home
*Dream about basketball

Ahhh, yes. The Mystery Job is revealed. And although it was all fun and games (literally) this week, the next few weeks will be harder. The Xbox game will be done and so I move onto testing NBA for Playstation 3.
Yes, Playstation 3, which hasn't even come out yet. I'll get to play it before all of you, mwahahaha. But its not all good since that particular game has like a million bugs in it (the players dont even have eyes, the stadium crowd is missing, Shaq actually flies through the backboard).
Sigh. All in a days work.

Posted by Wanderlusting at 9:30 PM

Where can I apply??

I spend eight years at university, write over 80 exams, spend an absolute fortune, work as a developer for five and-a-half years, and I'm still hacking away in dreary, buggy, legacy, back-end telecoms code that'll maybe get used in Russia, Morocco and Curacao.

And you walk straight into EA...

QA's a good in though; don't knock it.

Thor Harley said...
This comment has been removed by a blog administrator.
2:44 PM

...and now I play video games.

I don't know how that happened.

I love that I was right...and my guess was totally out of left field. At least you're not like me...a university degree in journalism working as a Creative Writer in advertising for Standard Broadcasting....IRONY.

Erk. Cancel that. Just got a really good new job offer today. Still telecoms, though... Clients in places like Nigeria (won't be going onsite in a hurry).