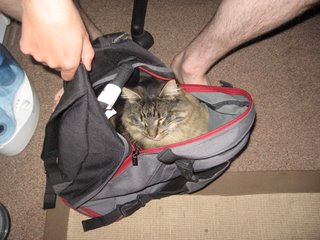 The cat's in the bag


Hard to believe that summer is almost over, isn't it? This has been my first summer working full-time, and let me tell you: It sucks. Instead of soaking up the rays and using these dog days to my full-advantage, I am cooped up inside, left to stare at the ball-scratching teamsters who frequent outside my window. At least they get to be in the sun.

Regardless, September is fast approaching and I am feeling my annual end-of-summer panic attack. QUICKLY! I must use the rest of my days with as much summer fun I can muster.

Such was the plan for this weekend. But I spent most of it indoors, sleeping. Of course, Ross is crippled so it's not like we could go trapaising through a field or anything...and it woudn't exactly be fair that I go frolicking among the briar patches while he lies on his bed, moaning in pain (OK, that's a slight exageration...there are no briar patches around).

However, we did get to do one easy summer activity which is going out to eat/drink on a patio somewhere. And what made it all the more enjoyable was that we had a Journalism School reunion. It was nice to catch up while catching up on the summer sun I have so sorely missed. 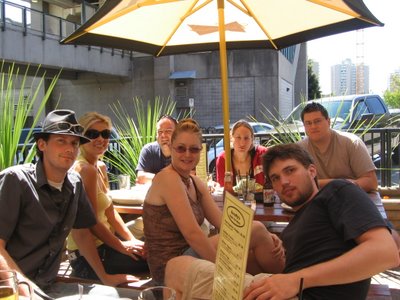 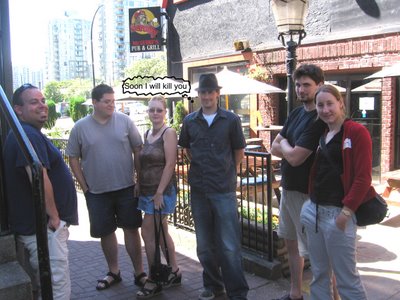 Ross plots the iminent death of all around him, as he plans to let loose "Clockwork Orange style"

Posted by Wanderlusting at 3:19 PM

(Ross)
Can't help but feel I came off somewhat badly in this post. Never call me a teamster again and remember, a bird in the briar is worth two in your bush...no, wait a minute...remember to believe in magic or i'll kill you...yeah that's it.

"Oh there you are Ross, what have you been doing?"