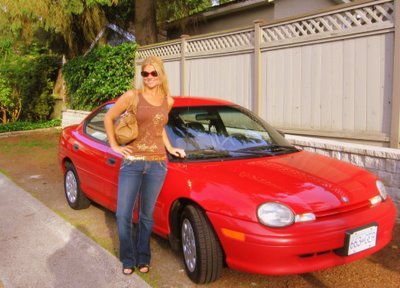 This is me...and my new car "Fill-in-the-Blank". Yes, that's right, I have a new car. It's a spiffy, red Neon that's perfect for zipping in and out of traffic and for parallel parking (which I'll be doing plenty of once I move downtown, and I'm real crap at it too). But the best part is that I think it's a car that suits my personality: It's bright and shiny (like my face on a hot summer day), it's red (the color I turn when I'm in traffic...and also my face on a hot summer day) and it smells nice (as do I, when it's not a hot summer day).
Unlike The Tank.... 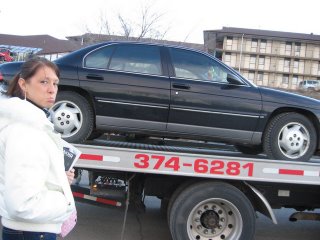 This a picture of Leanne and The Tank on "one" of the fateful days that The Tank broke down. At school of all places. I was driving down the hill when the brakes failed...and then the steering locked...and it looked like I was going to die. Thankfully I was able to sweep the car into the parking lot and run it into a parking space (and when I mean run, I mean only the concrete pillar at the end stopped me). Nonetheless, I still managed to pay for parking and go to class, calling the tow truck afterwards. My car ended up getting $1400 worth of repairs on problems I (and probably it) never knew it had.
Of course, that wasnt the first problem I had with The Tank. The CD player never worked properly and when a song skipped, you were stuck with it forever. At one point the mufflers nearly fell off. Weeks later, my wheels were declared unsafe for the road (not my$1000 snow tires, those are golden...btw, anyone want to buy them?). Then the growly noises started. Then I ran out of gas on the Coquihalla. Then I ran out of gas while parked overnight at Ross and Jeff's (how does that happen?).
Needless to say, the tank was fussy, loud, unreliable, large, moody and couldn't hold a tune. Much like me. Hmmmmm.

PS My new car needs a new name! Any suggestions? So far, I have a friend (you know who you are) telling me I should break the last N off of NEON and call it "Neo"...
Posted by Wanderlusting at 9:55 PM

I don't care what you call it as long as it's not Neo.

Duley noted. I was thinking more along the lines of "Zippy"...or Ross's suggestion: "Flame Boy!"

I think you should name it Suzette...it's red afterall! Suzette...what am I thinking? I've definitely been at work too long. Congrats on the new car...you should drive it to Terrace sometime since I'm moving there. I just got a job as a creative writer for television and radio! Calgary was short-lived but I'm living it well...hehe

Flame Boy is NOT OK!! Ummmmm.....What about Bertha, but then it's not really BIG so then it couldn't be BIG BERTHA, or Suzie Q or even Zippy! Maybe you need to drive it a while, see if it has a personality of it's own?!?!?!

Why Suzie-Q? I'm not naming it after my boyfriend's ex...that would just be weird.
So far, its personality is: Gas Guzzler. I have to fill up constantly...it's got a small tank.
Hmmmm. Maybe I can call it Small Tank....